The Kaduna State Governorship Candidate of the New Nigeria People’s Party (NNPP) in the 2023 election, Senator Suleiman Othman Hunkuyi has said there is no justifiable reason to tour the line of Muslim-Muslim ticket as he recognized the plurality and cosmopolitan nature of the state.

Senator Hunkuyi who stated this at a Parley with Southern Kaduna Journalists Forum in the state, said the party was still making strategic consultation before it unveils his running mate.

Hunkuyi who led Governor Nasir el-Rufai campaign to victory in 2015, also stated his party’s plan on the sacked traditional rulers, teachers and the hike in tuition fees by the Governor el-Rufai led APC government in the state.

Senator Hunkuyi who is a former Commissioner of Finance, who also lamented on the growing debt profile incurred by Governor el-Rufai, regretted that the next government will find it difficult to even pay salary, let alone embark on development projects.

Earlier, Chairman of the Southern Kaduna Journalists Forum, Mr. Ango Bally said with the media being part of the critical stakeholders in the 2023 elections, the parley was organized to engage especially candidates, by giving them the platform to ask the electorate what they are bringing to the table, to enable the electorate make informed choices on the candidates that would better the lives of the people, if voted into power.

Tinubu meets with governors at residence 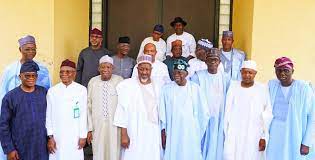