The ruling All Progressives Congress APC has disclosed of its resolve to formally unveil its Vice Presidential Candidate, Senator Kashim Shettima, to the Nigerian public on Wednesday.

The development comes as the Tinubu Campaign Organization TCO has defended the choice of Mr Shettima, saying the APC standard bearer, Asiwaju Bola Ahmed Tinubu wanted the best for the country in making his calculations.

Spokesman of the Tinubu Campaign Organization, Bayo Onanuga, noted that the team has followed the heated debate that the choice of Shettima has generated in the country and restates that religion or ethnicity was far from the calculations of the All Progressives Congress and its presidential candidate in picking his running mate.

According to him, if Asiwaju intended to cash in on ethnicity, he would have picked a running mate from the North Western part of Nigeria, which has the highest number of registered voters, adding that if he wanted to appeal to the base instincts of religion, he would have also gone for a candidate in the Christian dominated parts of Nigeria.

He said there was no such consideration, as Tinubu instead picked a tested politician and technocrat from the minority Kanuri ethnic group from the North East.

Meanwhile, National Organizing Secretary of the APC, Alhaji Sulaiman Argungu in a statement said all Members of the National Executive Committee NEC as well as Members of the Progressives Governors’ Forum have been invited to Shettima’s unveiling. 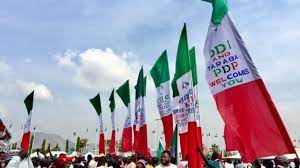