Super Falcons goalkeeper, Chiamaka Nnadozie has been awarded with the Bruno Martini Award for Goalkeeping Revelation of the Season in French women’s football.

Soccernet.ng. reports that the French Association of Professional Football Goalkeeper Coaches awarded the Paris FC goalkeeper for her excellent performance in the league. She helped Paris FC finish third in the league, as the capital team also qualified for a place in next season’s UEFA Women’s Champions League. 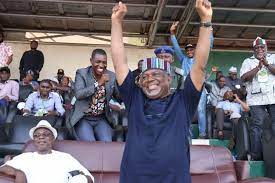