Rivers State Governor, PDP Presidential Aspirant says he would not shy away from making inputs towards resolving internal party problems if he becomes Nigeria’s Presidential

The Rivers State Governor and PDP Presidential Aspirant has said if he becomes Nigeria’s Presidential, he would not shy away from making inputs towards resolving internal party problems.

He disclosed this on Monday in Kaduna while interacting with PDP Party leaders as part of his consultation moves to intimate them of his Presidential ambition in 2023 election.

The Presidential Aspirant identified dialogue as key to achieving cohesion in the Party.

Wike lamented that Kaduna State is now a living shadow of its former self, due to the Insecurity that is bedeviling it.

According to him, the happening in the State are unfortunate, despite having the presence of military and other security formations, adding that the primary essence of leadership is the provision of security of lives and property, which is almost getting out of hand.

He donated the sum of two hundred million Naira to ameliorate the hardship faced by the Internally Displaced Persons, IDPs in Kaduna. 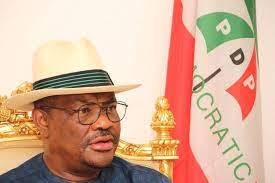