Uduak Akpan, who allegedly raped and killed Iniubong Umoren on the outskirts of Uyo in April last year, has a mental disorder, his father told the Akwa Ibom State High Court in Uyo, on Tuesday.

Frank Akpan, who is also a co-defendant in the murder trial, said under cross-examination at Tuesday’s proceedings that his son is suffering from schizophrenia, a serious mental disorder in which people interpret reality abnormally.

The testimony came as new a twist in a line of defence that has seen Uduak himself retracting his confessional statement to say he had never met Ms Umoren.

Frank Akpan and his daughter, Bassey-Awan Akpan, are both accused of being accessories after the fact to the murder of Ms Umoren. 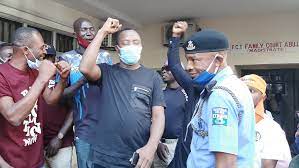