The Katsina State Police Command has killed two terrorists in its efforts to get rid of criminals in the north-western state while recovering AK-47 rifles.

Police Public Relations Officer in the state, Gambo Isah who disclosed this during a press conference on Monday in Katsina, said the criminals were neutralised after their attack on Kahiyal community in Bugaje village, Jibia Local Government Area of the state.

He explained that the success was achieved hours after the command received a distress call that terrorists in their numbers armed with AK-47 rifles attacked the community.

According to the police spokesman, the Divisional Police Officer Jibia led a team of police officers attached to the command’s Anti-Kidnapping Unit as well as some vigilante group members to their possible exit route and engaged the hoodlums in a gun duel thereby repelling their planned attack and neutralising two of them.

He also extended the commendation of the Commissioner of Police, Idris Dauda Dabban to police operatives and vigilante group members that participated in the operation.

NCC informs telecoms consumers, SIMs will not be unbarred by service providers until linked NINs of users. 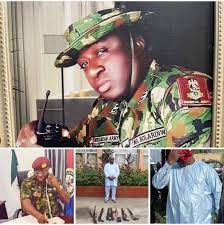