Former Commissioner of Justice and Attorney General of Kaduna State, Barrister Mark Jacob has described the current state of insecurity in the country as sliding into penury and instability, therefore, the ruling party must be voted out in 2023 for peace to be restored back.

The former Attorney General stated this in Kafanchan at the inauguration of his Campaign Organization for the race of the Southern Kaduna Senatorial seat under the Peoples Democratic Party, PDP.

Speaking on the Southern Kaduna Senatorial District he is seeking to represent, he explained that though the region is blessed with both human and natural resources but neglected by successive government, his mission in the Senate was to ensure the area is given the desired developmental attention by the federal government.

Barrister Jacob who appointed a business woman and grassroots politician, Mrs. Alheri Shock as the Director General of his campaign team, stressed the need to allow women occupy vital positions in the nation’s political affairs due to their potentials in changing the fortunes of the country.

He decried the relegation of especially women and youth to the background in governance as unacceptable, saying inclusive governance will constitute his legislative agenda in the Senate, if elected.

Minister of Transportation Rotimi Amaechi declares to contest for President in 2023. 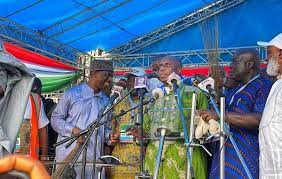