Governor Willie Obiano says his vision of a greater Anambra State and most dreams his administration shared on assumption of office, have come true.

The Governor stated this during a farewell statewide broadcast to Ndi Anambra.

Governor Obiano who recalled that Ndi Anambra’s request for security, gave rise to Anambra being the safest state in Nigeria and pointed out that instead of the legacies asked for, monuments were given to Ndi Anambra, working with his team.

The Governor, whose administration will formally terminate on Thursday, March 17th, 202 noted that he was not able to meet up with all his campaign promises to Ndi Anambra, emphasized that his intentions and ambitions were sincere, because him and his team tried their best to deliver.

Pensioners in Edo State protest over unpaid gratuity, entitlements, among others. 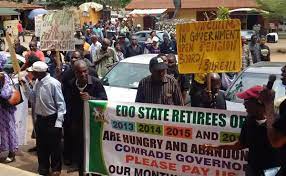