According to reports, she slumped shortly after the trial judge, Justice Emeka Nwite, deferred the ruling on applications that DCP Kyari and six other persons facing drug trafficking charge with him, filed to be released on bail pending the determination of the case against them.

Ramatu, who wore a black hijab, fell on the floor while armed operatives of the National Drug Law Enforcement Agency (NDLEA) were leading Kyari and the others away from the court premises.

The middle-aged woman was quickly carried and rushed inside one of the offices on the third floor of the court by some officials of the NDLEA and lawyers. One of the women in her company hinted to newsmen that she was asthmatic.

The NDLEA had on Monday, urged the court to deny Kyari and all the other defendants bail.

Minister for Women affairs rally support for female business financing. Minister for Women Affairs, Dame Pauline Tallen, has restated the Federal Government’s commitment towards ensuring access to finance for women owned micro, small and medium enterprises (MSMEs). Speaking at the Nigerian Exchange Limited (NGX) virtual symposium and bell-ringing ceremony for gender equality in partnership with Sustainable Stock Exchanges Initiative (SSEI), United Nations (UN) Women, United Nations Global Compact (UNGC) and International Finance Corporation (IFC), Tallen said there is a need to advance women’s entrepreneurship and increase their access to finance. She said Nigeria could only maximise its economic potential if efforts are made to close the gender gap and increase women’s stake in the economy. Tallen also congratulated Nigerian women for their immense contributions towards national development in both public and private sectors. Amen J Kantiyok 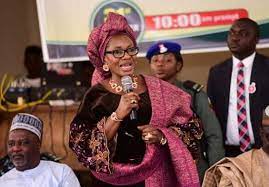