Senator Smart Adeyemi says colleagues not aware that dismissal of Chairman of APC caretaker committee was authorized by presidency.

Senator Smart Adeyemi says his colleagues in the National Assembly were not aware that the sack of the Chairman of the All Progressives Congress’ (APC) caretaker committee, Mai Mala Buni, was authorized by the presidency.

Adeyemi, who is a Kogi State senator, disclosed this, on Thursday, while speaking on National Television.

According to him, the controversy within the party after Niger State Governor, Abubakar Bello, assumed Buni’s Chairmanship since the latter travelled abroad for medical treatment was generated by people who have selfish interest.

It is believed in some quarters that Buni is being pushed out in order to ensure the party’s delayed convention goes on as planned this month.

Although Governor Bello said he has the backing of the President, a handover letter from Buni, who is also the Governor of Yobe State, suggests that he is expected to resume his Chairmanship duties on his return from medical treatment abroad. 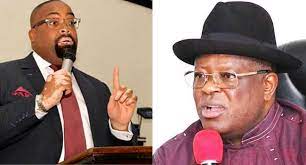