A three-storey building in Mushin area of Lagos State was on Wednesday gutted by fire following the explosion of a tanker discharging Premium Motor Spirit (PMS) at a nearby petrol station.

Farinloye said the explosion, which occured at a Mobil Petrol Station about 1p.m, gutted the residential building located at No. 71, Agege Motor Road, Alakara, Mushin, Lagos.He said no life was lost nor anyone was injured, adding that the containment of the fire has been very successful.

According to him, the Mobil Filling Station has been sealed-off by the Lagos State Safety Commission.

He noted that though the cause of the explosion is yet to be ascertained, it was a reminder on the need for Nigerians to be very careful in handling of gasoline. 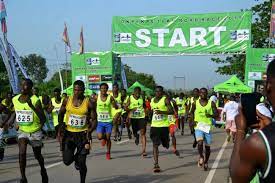