The Peoples’ Democratic Party (PDP) has won all 17 chairmanship and 260 councillorship seats in the local government elections held in Enugu on Wednesday.

The PDP defeated ten other political parties that contested in the council elections with wide margins.

Meanwhile, the Commissioner for Police in Cross River State, Aminu Alhassan, has assured residents of the State of adequate security during the Yala/Ogoja and Akpabuyo by-elections.

Earlier reports suggest that there is tension in Cross River state because of the Saturday, February 26 by-elections in Yala/Ogoja Federal Constituency and Akpabuyo State constituency. 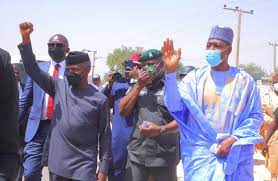