Russian forces have launched a military assault on neighbouring Ukraine, crossing its borders and bombing military targets near big cities.

In a pre-dawn Television statement, Russian President, Vladimir Putin, said Russia did not plan to occupy Ukraine and demanded that its military lay down their arms.

Russian military vehicles were said to have breached the border in a number of places, in the north, south and east, including from Belarus. At least seven people are known to have been killed in Russian attacks, police say. Another 19 are missing.

President of Ukraine, Volodymyr Zelensky announced that martial law was now being imposed across all of Ukraine.

Residents of Kyiv are fleeing the city and taking cover in air raid shelters as Ukraine’s capital is hit by the first bombs since World War Two.

Like so many we were woken by the sound of explosions, the attack that Russia promised would never happen had now begun.

With air raid sirens ringing out across Kyiv, there are two starkly different tempos on the streets of the city this morning.

More than 20 people injured in clashes between migrants and police in the town of Tapachula. 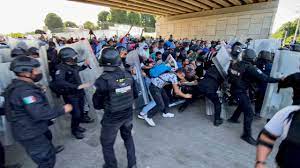 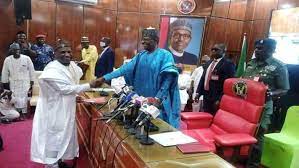