The former president stated this on Saturday while unveiling the autobiography of the Babanla Adinni of Egbaland, Tayo Sowunmi, titled ‘Footprints of A Rebel’ in Abeokuta, Ogun State capital.

According to him, whoever must live a life of honesty and integrity must be a rebel as Nigerians have no other country to call theirs.

The Serving Overseer of the Citadel Global Community Church, Pastor Tunde Bakare in his speech titled “Worthy Nation Building Legacies by The Older Generation of Nigerians’, called for inter-generational reintegration between the older and younger generations, as part of efforts to rebuild the country.

Bakare, a former running mate to President Muhammadu Buhari, stressed that the effort to rebuild the nation had suffered because of the marginalisation of the youth and the progressives who abandoned politics.

Two artefacts stolen from Oba’s Palace during 1897 expedition by the British have been returned to Oba of Benin, Oba Ewuare 11. 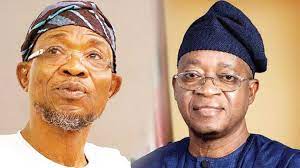