This incident happened on Friday evening during a minor argument over vehicle particulars between the two.

A passenger in the bus told newsmen that the vehicle was returning from Kawo with passengers when the KASTLEA officers stopped it and demanded vehicle particulars, which was immediately provided.

He said, one thing led to another and an argument ensued and eventually led to a fight adding that the deceased was hit with a stick during the argument and he died immediately.

He said as soon as the young man fell down, the KASTLEA agents left the scene for fear of being attacked by angry drivers

‎Confirming the incident, Kaduna State Police Command Public Relations Officer, ASP Mohammed‎ Jalige, said the Commissioner of Police Mudassiru Abdullahi had ordered the arrest of those behind the incident.

He added that the police will commence a full investigation.

The General Manager KASTLEA Corps, Marshal Garba Yahaya Rimi, said he is yet to receive the full details of the incident. 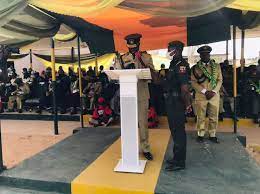