Authorities in Niger state have said that residents of some communities have continued to pay levies to terrorists in exchange for protection against attacks on their settlements.

Governor Abubakar Bello, who stated this shortly after he met with President Muhammadu Buhari at the Aso Villa in Abuja, lamented that such payments were not enough to stop the attacks.

Addressing State House correspondents at the end of the meeting with the President, he said the state government has appealed to the residents of the affected communities not to pay any money to the terrorists.

He admitted that there were serious concerns about sustaining the fight against the terrorist group, stressing that informants within the communities constitute a major challenge.

But he is optimistic that with the current level of intervention, temporary respite would come to residents of the affected communities in two weeks.

Governor Bello also urged states sharing borders with Niger, including Kebbi and Kaduna to collaborate with his administration to ensure sustainability in the fight against criminals in their domains. 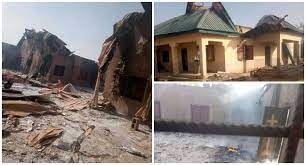