Eligible voters who refused to come out for the Saturday local government elections held on the 4th of September, 2021 in Kaduna state have been giving their reasons for not partaking in the exercise.

They spoke when interacting on Invicta’s Flagship Political and Public Affairs programmes Perspectives and waka waka, where they mentioned failed promises, difficulty for incumbency to be defeated among other factors.

For persons like Murtala Prejaro who went out to vote at Bakin Ruwa number 12 but ended up not voting as well as others spoke about their experiences.

There were commendations for the State Governor for introducing the Electronic voting machinery, but some observations were made.

The State electoral body was also advised to do more and go all out in doing its part to reduce political laziness.

Out of the 23 local governments in the state only 19 took part in the elections with the 4 others expected to happen on the 25th of September, 2021. 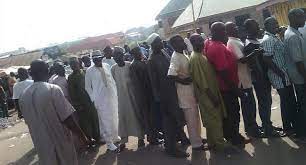