The Local Government election in Southern Kaduna region was marred by malfunctioned Electronic Voting Machines (EVM), as a lot of voters lamented they were disenfranchised from voting candidates of their choice.

While the EVMs were said to be configured wrongly in some Polling Units, some of the Electoral Officers have challenges operating the Machines.

Invicta FM Correspondent, Ango Bally who monitored the election in parts of Kachia, Jaba, Jema’a and Kaura Council areas, reported that the election was characterized by similar challenges, though, with an appreciable voter turnout.

While some of the machines were returned to the lCT Experts of the Kaduna State lndependent Electoral Commission (KADSIECOM), for reconfiguration, some of the Electoral Officers were seen making frantic effort to get them rectified after 4:pm when voting was supposed to have ended.

Most enthusiast voters who spoke to Invicta FM, expressed the willingness to wait until when the machines were rectified, while some were seen canvassing to be paid before they cast their votes to the highest bidder.

However, voting went smoothly without hitches in areas where the Electronic Voting Machines didn’t have any problems, as most of the voters expressed preference on the use of the EVM than manual process. 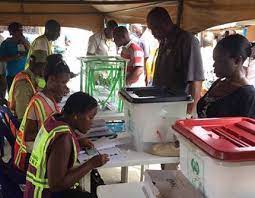