Procession for the enforcement of the Nigerian Labour Congress, NLC, five-day strike, for the second day was disrupted by hoodlums, who arrived the NEPA Roundabout meeting point, chasing people with cudgels, sticks, stones and other dangerous weapons.

Kaduna State Governor, Malam Nasir Ahmed el-Rufai had drove passed the NEPA Roundabout with his motorcade to the NEPA Building, while the labour leaders were delivering speeches. But shortly after he left the NEPA building, a number of hoodlums arrived in mini shuttle buses and started chasing them with stones.

Addressing the amalgamated labour union shortly after they mobilized and chased the hoodlums away, NLC President, Comrade Ayuba Wabba, accused Governor el-Rufai for sponsoring the hoodlums to neutralize the unison of labour force.

The Labour leaders also reacted on Governor El-Rufai’s declaration of the NLC President, Ayuba Wabba wanted for leading the strike in the state.

The amalgamated labour union who took their procession round some strategic parts of the state, vowed to stay put, till the fifth day elapsed. 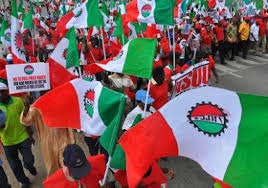